Who was Robert Welch and why Gloucestershire?

Robert Radford Welch (1929 -2000) was a silversmith, industrial and domestic designer who was born in Hereford and grew up in Malvern. After studying in Birmingham and London, he set up a studio and workshop at the Old Silk Mill, Chipping Campden in 1955. This building was formerly the workshops of C. R. Ashbee’s (1863-1942) Guild of Handicraft, from 1902, and still houses the workshop of one of the Guild silversmiths, George Hart.

The contrast between the Harts’ workshop on the second floor and Robert Welch’s studio above has always been noticeable, but was made more so recently following the renovation of the top floor. During these renovations the attic, which formally held the archive of Robert Welch Designs was removed and the space exposed to the rafters. Prior to that work taking place, the collections were relocated to Gloucestershire archives for cataloguing – so, for a time at least, the company must have felt a little like it had lost its memory.

Even whilst at college Robert recognised that silversmithing alone would not sustain him, so he had begun researching and working in other materials such as stainless steel. This specialism in a relatively new material led to his being appointed design consultant to a Bloxwich company, J. & J. Wiggin Ltd. straight from the Royal College of Art, and from his base in Chipping Campden he could make weekly visits to their Old Hall Works in the West Midlands whilst also maintaining a presence in London. 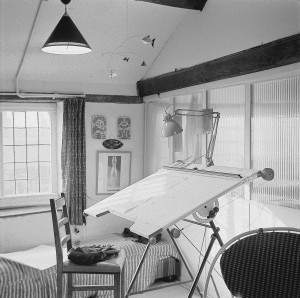 Above: Robert’s first Studio at the Mill

The story of how Robert Welch ‘rented a small room in the Old Silk Mill in Chipping Campden and installed his drawing board and a truckle bed’ is contrasted by the following quote from the Goldsmith’s Journal, June 1957 which describes the workshop quite differently only a few years later (and, as most of our photographic record is in black and white, provides us with an interesting insight!):

“Robert Welch, a young silversmith with a new outlook has rebelled against the traditional workshop. The designing office with its artists’ materials is separate from the workshop. And the workshop itself is a model of tidiness and order. Stakes are neatly held in racks. Tools are in rows of clips along the benches (…) the shanks of the large stakes are painted in pastel shades and the sides of some of the steadies, sections of tree trunks to hold stakes, are cut with flats and polished. It is an extraordinary workshop.”

Above: Robert (seated) and John in the workshop

In 1958 John Limbrey (1933-2013), Robert’s friend from Birmingham College of Art, School of Silversmithing and Jewellery joined the workshop as assistant from which point he was the craftsman chiefly responsible for making most of the silverware and 3D models. Robert and John were both talented draughtsmen, but first and foremost were craftsmen and preferred to resolve problems in the workshop.

In 1960, Robert Welch formed Robert Welch Associates as a group, for credit of work and for the status of his expanding team, and in 1961 the company Robert Welch Designs Ltd. was incorporated. They continued to produce handmade work in silver, ecclesiastical and ceremonial commissions mainly, with a few domestic pieces, but the mainstay became their designs for mass-produced objects manufactured in a variety of materials.

One of the materials Robert found a new affinity with was cast iron:

“Since I was trained in Silversmithing, I did not find it unduly difficult to come to terms with cast iron. All manner of shapes known as stakes or mandrels which are used in the silver workshop to form and beat silver on, were also made in cast iron; and it was part of one’s training in the craft to make patterns in wood and castings in iron – these would be filed to shape and polished before use.” Welch, R. (1986). Hand and Machine, p.158

In 1969 Robert opened his first Studio Shop, selling only his designs, in Chipping Campden – there are now two further shops in Warwick and Bath – and the business, which is today run by two of Robert’s children, Rupert and Alice Welch, is still based in the Old Silk Mill.

Between March 2013 and April 2014, following the removal of the collections from the attic of the Old Silk Mill, Beata Bradford (Project Curator) and myself (Project Archivist) undertook a project to clean, catalogue, re-package and partially digitize the Robert Welch Design Archive and Object Collections at Gloucestershire Archives. This first phase of cataloguing is now complete, the paper collections repackaged and every object photographed. The database comprises over 8,000 core records (as well as a further 13,347 records in the affiliated management and authorities databases), and the inventory includes:

• 3572 objects; including trials, models, prototypes, tools, and finished pieces*
• 2000+ glass plate negatives
• 597+ sketchbooks and hundreds of notebooks
• 2+ plan chests of flat drawings
• 15 boxes of rolled drawings
• Photograph albums, portfolio books, prints, negatives and transparencies
• Correspondence and diaries
• Reports, research and project files
• Exhibition catalogues
• Press cuttings, articles and publications
• Film and audio
• Business records; including general administrative and financial ledgers, as well as those specific to running a Silversmithing workshop and design studio
• Family papers; including a box from Robert’s fathers experiences during WWI
• Paintings; mostly by Robert but some by other artists, often those who had exhibited at the Chipping Campden Studio Shop during the 1970s

*The object collection is growing almost daily as new acquisitions are made – we have had items donated as well as making several purchases, and we hope this will continue.

As can be seen, the collection is varied and whilst working through it many questions were raised – from defining the ‘collection’ (Should we include material post-2000? Should we separate the family papers and professional?), establishing an agreed thesauri for describing objects and design/workshop practices, to the preservation requirements of various unusual and unexpected materials. The benefits of being able to undertake the cataloguing project at Gloucestershire Archives included having access to the knowledge and experience of the staff there; all have helped with our unusual questions spanning the practicalities and theoretical challenges of the project – from preservation and conservation enquiries, copyright queries, to cataloguing conundrums!

Funnily enough, Robert apparently investigated the possibility of depositing his archive at Gloucestershire Archives during his lifetime, so it felt like a nod to his memory too. He seems to have been distinctly aware of the importance of archives, and the collection includes drawings of an ‘archive room’ as well as previous catalogues of sections of material, and plans for exhibitions of the evolutions of his designs – as well as this, I have come across at least three archivists/conservators who spoke with Robert about his collection in the 1990s. It feels very satisfying to have been able to complete a project which obviously meant so much to Robert.

What have we found?

Cataloguing is an intensive and systematic process, the aim of which is to record consistent and useful data across a collection therefore making it discoverable to users, but the scrutiny of the items often provides unexpected glimpses of the person who made the records.

The strangest discovery as part of the Robert Welch project so far has been a series of accidental self-portraits, some almost works of art in their own right – my favourite of these is a 1967 photograph of Robert’s feet against the backdrop of some of his most seminal designs displayed in a solo exhibition held at Heal’s, Tottenham Court Road. Others show Robert and colleagues reflected in photographs of products. These were discovered because the glass plate negatives had been digitized, work which we were able to commission the reprographic department at Gloucestershire Archives to undertake. Photographing or scanning an image at a high resolution allows for zooming in more closely than the human eye is capable of – and imagine our surprise when we found Robert staring back! 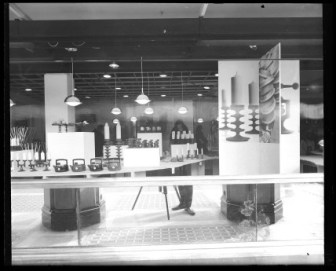 Above: Robert is often visible in his photographs

I suppose he was aware that the reflective surface of silver and stainless steel would capture his likeness, and in some (there are hundreds!) he can be distinctly seen trying to hide behind things. What is so wonderful about these portraits is that they provide authorship, as well as insight to working practices and life in the studio. They allow us, as cataloguers, alongside other types of research to begin to build up our picture of Robert and his methods, information which may then be reflected in our recording of his archive, all making for a richer telling of the story.

Following the completion of the work at Gloucestershire Archives, the Robert Welch Design Archive and Object Collections have been returned to the company and I have taken on the permanent role of Heritage Officer.

This archive is, unsurprisingly, a particularly visual one and for the modern day company to be able to make the most of the collections a written catalogue, whilst a good start, is not the end of the process. In an ideal world each piece would also be digitized, so work is now progressing to itemize pages of sketchbooks, individual drawings and photographic material so that digitization planning can progress. Alongside this further cataloguing work, in my new role I will also be:

The catalogue as it stands is a relatively empty structure, the objects are individually recorded on the museum side but sometimes with little information, and for the paper records often just a bundle description exists. The next phase of work will begin to make connections between the paper records and the objects, thus cross-referencing the whole database and filling out the detail. This level of research and investigation is a luxury not usually afforded to archivists, they are usually the ones who enable this sort of work for the researcher, but I am lucky enough to be able to continue working with the records as a researcher and archivist – and in none other than the Old Silk Mill.

This is a satisfying conclusion to the cataloguing project, and exciting beginning for a collection which I hope will become an embedded resource for the company over the years to come – and we couldn’t have done it without Gloucestershire Archives!