The original company formed by Sir George Dowty to manufacture aircraft equipment, named Aircraft Components and then Dowty Equipment, was formed in 1931, eight years before the start of World War 2. It meant that by the time war broke out, the company had prepared itself for the massive increase in orders and, as a result, factory space. By 1940, when Dowty Equipment was named, there were nearly 3000 people employed by the company and various sub-contractors around the country as well as in Canada and the USA. Dowty was able to claim that by the end of the war “not a single aeroplane during the war years had ever been grounded for lack of a Dowty spare”.

The Dowty name was attached to a huge number of aircraft, with Dowty filing patents for retractable undercarriages, cockpit indicators, hydraulic pumps and controls, hydraulic packings and then a liquid spring shock absorber in 1939. The Gloster Whittle E28/39, the Allies’ first jet aircraft, was fitted with Dowty equipment, as was the Gloster Meteor. Dowty also set up a rubber company which provided his aircraft with synthetic seals throughout the war years, and continued a successful seals company with subsidiaries for decades after the war. 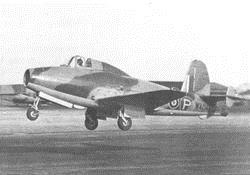 By the end of the hostilities, the Dowty companies had built 87,786 landing gears and 984,388 hydraulic units.

Sir George Dowty recalls the War years vividly in his autobiography, which we hope to publish this year or next. He wrote: “At the outbreak of war a German aircraft flew over Arle Court [his headquarters, purchased in 1935]. … It came and went unmolested. After the war I was presented with photographs taken of my factory from this plane which are … evidence that ours was a marked factory”. The Gloster Aircraft Company’s factory in Brockworth was always fearful of a raid from the Germans, and Dowty therefore knew his factory was also in danger. The Lodge at Arle Court was badly damaged by a bomb at one point.

Dowty also set up a factory on the Isle of Man, which continued until at least the 1990s. The purpose of that was to employ skilled men who had migrated to the Isle of Man from Coventry after they had lost their jobs in the war. The setting up of a factory there enabled work to continue without threat of bombs.

One of Dowty’s largest factories was set up during the Second World War as well: requiring a new factory for salvage and repair of aircraft during the Battle of Britain, Dowty needed to find somewhere in or near Cheltenham for that purpose. He found the Birds Custard Powder factory near the railway station at Ashchurch, built by the Midland Railway Company as a forage store for railway draught horses. He was able to use some of the unoccupied space there and the site quickly grew after the war into factories for Dowty Hydraulic Units, Dowty Seals and Dowty Mining Equipment among others.

The Dowty company also had its own Home Guard company, belonging to the 1st Battalion (Cheltenham) and known as K Company. The photo below shows a recognition of service in the Home Guard by Kenneth Mills, who was the Dowty Group secretary for many years.

Recognition of service in the Home Guard by Kenneth Mills

Please see the dedicated “Dowty in the Second World War” web page on the Dowty Heritage website for more information and photographs.