Thirty years ago, Nicholas Kingsley (late of this parish as it were) wrote an article for Country Life on the ‘conundrum’ of how Sir Robert Atkyns chose the places which Johannes Kip was asked to draw and engrave for inclusion in his Ancient and Present State of Glostershire published in 1712. Although there are 65 illustrations in the book, 60 of them the houses of the county gentry (61 counting Chepstow Castle which was not in Gloucestershire but was linked through the lord of the manor of Tidenham and the bridge over the Wye), there were yet others he might well have chosen. As we know, Gloucestershire was a big county, including those parishes in the diocese of Bristol when it was created in 1542 and much more recently in Avon and then in South Gloucestershire local authority areas. It must have taken Kip a considerable amount of time to travel around the whole county, as well as staying in each place long enough to carry out a simple survey and then to draw it. Kingsley suggested therefore he may not have been able to reach the farther bounds of the county. The engravings are a unique resource and particular ones are frequently used by local historians. The Gloucestershire Gardens and Landscape Trust is one such, using them to examine historic gardens and compare them with the present day. 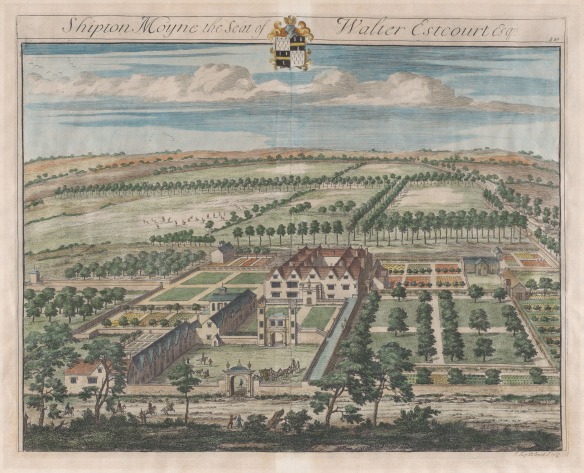 A more general project is now underway necessitating visits to Gloucestershire Archives to research background information, especially maps. Like many regular visitors, the lockdown is just totally frustrating. However, some work can still be done, and in particular, a lucky find through a second-hand bookseller enabled me to study Atkyns more intensively than has been possible in the limited time available on visits to Gloucestershire Archives. Not long before Covid-19 began to sweep through the country, a fairly casual internet search came up with a copy of the Atkyns reprint (both volumes), said to be in good condition, and at a reasonable price. As the meticulously-wrapped parcel was undone, a nearly pristine copy emerged. What a pleasure!  It was a surprise to find that it had come all the way from the private library of someone in Canterbury. Less surprising was the fact that discreetly marked in pencil inside the back cover was Alan Hancox’s name, and the price £30. One for those noting rises in the cost of living! Lots of people will remember Hancox’s second-hand bookshop in a basement off the Prom in Cheltenham. When he knew he was seriously ill, he started to sell the books in his library – a very sad business. Would that I had spotted the Atkyns then.

So one response to Kingsley’s article now possible after studying Atkyns is a robust defence of Atkyns and Kip’s coverage of the county. Marking on a map all the houses that were illustrated shows that they were exceedingly well spread round the county. It’s clear that there were clusters of several within a short distance of each other, which was entirely practical, but there were some on the farthest boundaries of Gloucestershire and there was no significantly large area with none at all. There is more to be found out about how the ones to be drawn were selected, and to some extent it will always be impossible to know much without being able to talk to Sir Robert or Mr J Kip.  But the achievement of the two men in the conditions of early 18th century travel are remarkable.