It’s an exciting day when the Mayor of Gloucester calls in.   But it’s not me he’s here to visit – along with several Friends of Gloucestershire Archives, he has come to see the gorgeous Gloucester City Charters, kept here at Gloucestershire Archives since 2012.  The City Council consider the Charters to be amongst the most significant items held here because they document the development of Gloucester as a city.  The oldest Charter was issued by King Henry II in the year 1155, and the other twenty-two charters span the centuries from the Middle Ages right up to the last charter, granted in April 1974 by our own Queen Elizabeth II.  Each document is hand-written on one or more sheets of parchment, and most bear the Great Seal of the King or Queen who issued it.  Some, like those of Henry VIII, Queen Elizabeth I and Charles II, bear elaborately decorated portraits of the monarchs.  But in the case of the charter of Edward IV, dated 1462, there was space left for beautiful lettering to be drawn in but this never happened and the space is just blank – perhaps there wasn’t enough money available at the time to pay a scribe to do this? 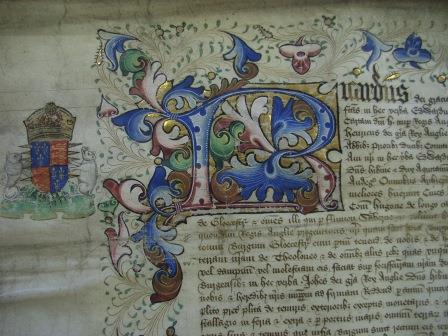 It’s money that is behind the visit by the Mayor today. Gloucestershire Archives is hoping to obtain grant funding from the National Manuscripts Conservation Trust (NMCT), a charity devoted to the preservation of nationally important documents, to help us preserve our City Charters.  The Archives has also been promised funding by Gloucester City Council and the Friends of Gloucestershire Archives. The Mayor and City Council are keen to offer help and support in our efforts to secure a grant from the NMCT.  So, why do we need funds for the City Charters?

It’s because we are hoping to offer them better physical protection – currently, they are at risk of being damaged when they are handled for display and loans.

The Archives is committed to doing its best to ensure that these ancient treasures last for centuries more. We already do the best we can, by storing the Charters in a secure climate-controlled strongroom.  We diligently monitor the strongroom to make sure that no pests such as mice or beetle larvae threaten to eat the parchment sheets.  And the Charters are kept in the dark, to prevent fading of the fragile inks.  But the old oak cabinet in which the Charters are stored isn’t ideal.  Some of the Charters are a bit too large to sit comfortably on the wooden trays that fit inside the cabinet, meaning that the seals have to be twisted round and made to sit on top of the parchment sheets.  This puts stress on the fragile silk cords attaching the seal to its document.   Also, it can be extremely difficult to move the Charters safely when they go on exhibition.  Some of them are very large and very heavy!

We would like to see each Charter stored in a custom-made box which fully supports and protects the parchment sheets, the wax seal and the silk cords.  The boxes will be too large to go back into the old oak cabinet, so we also need to find a new metal cabinet with many shallow drawers to accommodate the custom-made boxes.  The world-renowned Bodleian Library Packaging and Design Service has the skills to make the boxes for us, crafting each protective enclosure by hand to ensure a custom fit.  Such high quality boxes will last for decades, ensuring that future generations of Gloucester citizens can enjoy these wonderful treasures.