The ‘List of Electors’ booklet mentioned below was discovered by members of Cheltenham Local History Society as part of their project to catalogue the archive of Ticehurst and Wyatt, solicitors of Cheltenham, for Gloucestershire Archives. The cataloguing is also helpful to the compilers of the Victoria County History of Gloucestershire Cheltenham volume, who are making good use of the work.

The history of voting and democracy is illustrious but not always truly democratic. One definition of democracy is ‘Government by the people; a form of government in which the supreme power is vested in the people and exercised directly by them or by their elected agents under a free electoral system’. However, it has not always been the case; a survey conducted in 1780 revealed that only 214,000 people in England and Wales, which was less than 3% of a population of 8 million, were part of the electorate. This number was even smaller in Scotland; in 1831 only 4,500 men out of a population of 2.6 million were eligible to vote. Many large cities such as Leeds and Manchester did not even have MPs, whereas small boroughs, like Dunwich in Suffolk, whose population in 1831 was a meagre 32, were sending two MPs to Westminster. The voting system in Britain was antiquated and unrepresentative. In 1832, in an attempt to clean up corruption within the voting system, the Government reformed the structure so every man who paid more than £10 a year in rates or rent could vote, but this only applied to the boroughs. This change raised the number of voters by around 38%. It was not until February 1918 that women over the age of 30 were allowed to vote, as part of the Representation of the People Act. 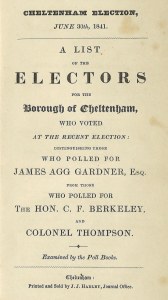 In 2016 everyone has the privilege of our voting choices being anonymous, since the introduction of the secret ballot in 1872. Before this, entire communities would come to watch and see how people voted on polling days. A ‘List of the Electors book’ (i.e. poll book) held in the Archives (D2025/Box 136/3), documents the details of everyone in Cheltenham who voted in the June 30th 1841 elections. The information within the poll-book shows people’s names, occupation, and addresses. Electors are listed on colour-coded pages relating to whom they voted for. Blue represents the Conservative candidate, James Agg Gardner Esq.; with yellow for the Liberal candidate The Hon. C. F. Berkeley, and red for the Independent candidate Colonel Thompson.

Poll-books date back to 1696, when an act of Parliament was passed to control disputes concerning electoral results and fraud. The sheriffs were required to make lists of voters and the candidate they voted for in county elections; the results were then published until 1872 when secret voting was introduced.

Looking over the List of Electors of the Borough of Cheltenham is thought provoking. The book shows that the Liberals gained the most votes with 763, then Conservatives with 653 and 4 for the independent party. It is fascinating to study the demographics of people who voted Conservative and compare them with the Liberal voters and see how things have changed.