Pam Daw and Tony Conder have completed a catalogue of the planning permissions sought for the suburban ring round Gloucester’s historic core between 1909 and 1960 (DA27).

Early entries are mostly for houses and villas along the then leafy roads leading into Gloucester; there is nothing particularly grand, just small scale expansion. Among them are smithies, shops and agricultural improvements. Many local architects and builders feature in these records.The first plans for a relatively new invention come in October 1909 with an application for a ‘motor house’ in Kenilworth Avenue. Over succeeding years these structures will be renamed and a steady stream of ‘garages’ will be requested. As the new estates are built in the 1930s whole rashes break out road by road, one initial application followed by a small flood as the ‘Jones’ are kept up with!

The First World War does not affect planning much; the bigger developments like expansion of Over Hospital and additions to Barnwood House are more domestic than military. 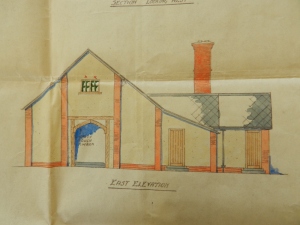 After the War the steady growth continues. There is a movement to re-use army huts for bungalows. Late in the 1920’s the pattern changes. The re-routing of the Cheltenham road brings new development land into play and blocks of houses start to be built from 1928 onwards. Development centres on Innsworth Lane, Oxstalls Lane and Cheltenham road itself. In the 1930s attention switches to Churchdown as land around Pirton Lane and Parton Road begins to be developed. In the later 1930s Highnam and Brockworth begin to feature with the Maidenhall, Meadow and Ermin Park estates bringing in huge blocks of housing by the standards of the time.

One of the reasons for the growth is also covered in the applications. In the 1920s the airport at Brockworth with passenger facilities and the expansion of the Gloster Aircraft factory appears in several plans. The most consistent growth covered is that for the Rotol airscrews factory at Churchdown. The steady expansion is ramped up in 1938 as the country begins to re-arm and new units, testing shops and facilities appear. As war approaches the air raid precautions are planned and in 1939 changes appear monthly.

By World War II, Zurich Insurance have moved to Minsterworth. The Midland railway (under state control) plans to expand the line through Churchdown and is setting up a navvy’s camp to allow the work to proceed. It is good to know that planning niceties will not hold up the construction of a Heavy anti-aircraft gun battery at Parton Road Churchdown, and obviously the planning process is watertight as location and plans reveal information useful to the enemy!

Many of the later applications have less detail on the builders and architects but include better information on addresses and who the application refers to, home owners or estate developers.

After the war there is further expansion at Rotol and the Gloucester Aircraft Factory and many more local farms become estates. There are all sorts of strands from Gloucester’s History, through family history and interest in specific houses or industries which these plans will inform. Domestic architecture is covered in the many fine drawings, the history of the asbestos garage and changes to ventilation as gas heating appears. There are even drawings for a domestic hen house should you be thinking of keeping chickens.