People in the past had to fight for many of the rights we take for granted today, although the battles they chose and the way they fought depended on their individual circumstances.

For suffragettes like Mary Blathwayt – daughter of a prominent South Gloucestershire family, active member of the Women’s Social and Political Union, and dedicated diarist – speaking at a rally in Bristol in 1909 brought particular dangers:

“Things were thrown at us all the time; but when we drove away at the end we were hit a great many times. Elsie Howey had her lip hit and it bled. I was hit by potatoes, stones, turf and dust. Something hit me very hard on my right ear as I was getting into our tram. Someone threw a big stone as big as a baby’s head” [8th June; D2659/27/14].

Although there’s still debate about what turned the tide of support for women’s right to vote, the sheer numbers of women involved in war work during WW1 would have clearly shown the contribution women could make to the economy and the country.

Hundreds of thousands of women contributed to key industries such as munitions and weapons manufacture, doing work that was both dirty and very dangerous. They also worked as farm labourers, nurses, and in offices, keeping Britain running. We can see the scale of participation in this photograph of the “munitions girls” working at Lister & Co. in Dursley, in 1917. 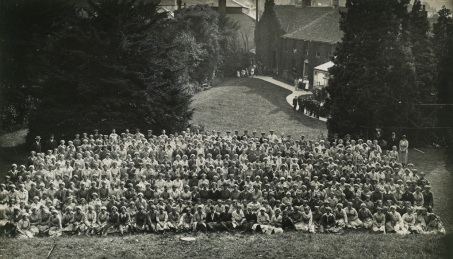 “Munitions Girls at Messrs R. A. Lister and Co. Limited, Dursley. July 12th 1917. These patriotic girls are engaged in the manufacture of munitions for the Great War, now raging” (D7405/1/2/3)

Most of the project costs are being covered by grants and contributions from project partners, but we are seeking donations too. Please donate online at www.foga.org.uk or in person at Gloucestershire Archives.