If you’ve been following our recent blog posts you’ll know that we’ve been exploring the history of our site, just off Alvin Street in Gloucester, as part of the “For the Record” project.

We’ve looked at documents about this building’s history as Kingsholm School, at maps showing the plant nursery that was on this site in the 1850s, and at a map of Gloucester’s civil war defences showing this area.  What we didn’t know much about was the site’s earlier history, which is where the archaeologists came in!

If you visited Gloucestershire Archives earlier this summer you might have seen the team from Cotswold Archaeology digging up our car park.  They created three trenches while they were here: two between the Archives building and the railway bridge at the back of the site (Trenches 1 and 2), and one near the car park entrance (Trench 3).

We knew that there were gardens and a plant nursery on this site, so we were expecting the team to find evidence of cultivation soil layers at the tops of the trenches, but we were a little surprised by what was uncovered as the dig went on.

Trench 1 contained a large section of a Roman ditch that contained late 3rd to 4th century pottery, alongside stone and ceramic building material.  In the south-eastern part of the trench a possible yard surface or trackway was found, on which the team found a heavily corroded Roman coin provisionally dated to the 1st or 2nd centuries. 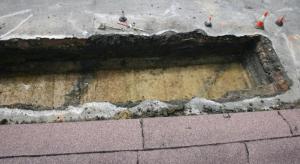 Trench two included an east/west aligned ditch and evidence of a Roman pit.  Two other pits in this trench remain undated, although the similarity of their contents to the identified pit and the shared covering of cultivation soil suggest it may also be Roman.  The function of these pits remains uncertain, but given the lack of finds within the fill, it’s possible that they were quarry pits.  There were finds within the large ditch, however, and these included 3rd to 4th century pottery and some high-status, imported 1st to 2nd century pottery. 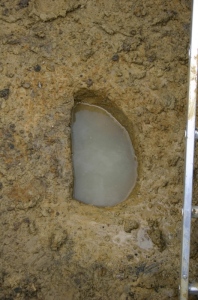 Near the main gate, in Trench 3, the team uncovered two possible post-holes, but no evidence to date the pits in which the posts would have stood.  However, they’re likely to be Roman too, as their position in the trench is broadly equivalent to the yard surface or trackway found in Trench 1.

The new strongrooms we’ll be adding to the building as part of “For the Record” need to take account of the findings from this survey.  We’ve talked to the architects and arranged for the foundations of the new areas to be designed in such a way to protect anything of interest that may still be hiding in the ground.

Over the coming weeks we’ll be sharing more about the items found in the trenches, and discussing what might have stood on this site in Roman times.

We hope you’ll be able to join us.

Most of the project costs are being covered by grants and contributions from project partners. But we are seeking donations too. You can do this online at www.foga.org.uk.