Since January, I have been working on the Cirencester project, cataloguing the collection of two busy solicitors offices: Mulling Ellett and Co and Sewell, Mullings and Logie. The project is entitled ‘Boxes of delights’. Here are a few of the delights which I have found so far: 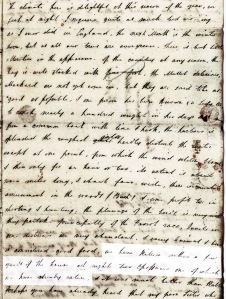 Caption: ‘we have killed within a few yards of the house at night two opossums, one of which we have already eaten’.

D181/box98071/3- A letter from Daniel Watkins a surgeon who chose to emigrate to Australia to Mr Newmarch of Cirencester, solicitor concerning life in Port Lincoln in 1840 and describing the settlers’ enjoyment of fishing, shooting parrots and eating possums. He does offer some complaint however ‘I do terrible miss my malt liquer’. Following a long description of these activities and the scenery, the author tells his agent about the death of his sister: he clearly had other priorities.

Gravestone of the Cornwall family of Fairford

D181/box98110/12- A bundle of administrations which shows four siblings from the Cornwall family of Fairford, who died over the course of two weeks in August 1846. We know from other records that there was a widespread outbreak of typhus at this time and that this was the cause of these deaths. The eldest was 22 years old and the youngest just 16. This is poignant and very interesting- their father was a surgeon in the town and is mentioned in Victoria County History. Fairford History Society have kindly provided a photograph of their grave in Fairford at St Mary’s Church. Because the parish registers are now online and can be accessed via Ancestry, it is possible to see the burial registers showing these burials and their dates.

With the help of a small but dedicated team of volunteers, the project is progressing well and they have found a few delights of their own. I hope to post some more ‘delights’ as I find them.