This is the story of ‘The Howse that was so fayre’, investigated by Chipping Campden History Society over the past eighteen months. In 2013 Gloucestershire Local History Association’s annual Local History Afternoon carried the theme of ‘Gloucestershire’s Special Houses’. There was an obvious one for us, Campden House. 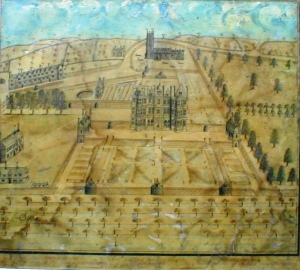 It is a story of wealth, power and politics, of style and ingenuity, and of war and tragedy. This was a fabulous Jacobean mansion and garden, whose beauty and influence lasted a mere 33 years.

In 1612, wealthy mercer and moneylender Sir Baptist Hicks began building a beautiful house and garden in Chipping Campden, creating an estate that reflected his fortune and influence – no expense was spared. During the Civil War the house was garrisoned by Royalist troops, and in 1645 they left, setting fire to the house as they went. All that remains of the house today is a ruined part of the south wall. The exquisite banqueting houses, the gatehouse and the layout of the gardens survive to this day.

Investigating a house that existed for such a short time is a challenge. No contemporary images survive, and only a few written accounts. We have had to dig deep in our search for clues, in archives and records, by studying Jacobean architecture and garden design and following the clues around Chipping Campden.

There were two later maps that showed the outline and use of the site – the first, dated 1722, was found in Leicestershire and Rutland Record Office, together with a few papers of the Gainsborough estate that referred to the House. The other map of Campden, found in Gloucestershire Archives, was drawn up in 1818 for the Countess of Gainsborough and shows the features that we can recognise today.

The site itself holds the most clues, and we have got our feet dirty, with a programme of archaeological and landscape research. We have the ‘bare bones’ of a complete, early 17th century formal garden clearly revealed both by aerial photography and examination on the ground. Sir Baptist Hicks moved in court circles, was intimate with the Cecil family and would certainly have visited Hatfield and other grand houses where there was an unprecedented upsurge in ambitious garden projects in the latest style. The Campden garden has all the major elements he would have seen in these fashionable Jacobean Gardens (except perhaps, a ‘grotto’).

We worked with The Landmark Trust, who now manage the site, to clear the water parterre and other areas, revealing more detail of the construction of the garden. Then, early this year, we commissioned a geophysical survey of the house and gardens, with our volunteer support.

This showed much more clearly the outline of the house and confirmed the design of the parterre. We were left to use our imagination in reconstructing the arbours, the walks, the planting and the canal, along which visitors would have sailed gently and enjoyed the views.

The design of the house itself is unknown: a drawing was made a century later and we studied many contemporary houses that still exist, including nearby Chastleton House, Hatfield House and Blickling Hall. Sir Baptist Hicks built his London mansion at the same time, also called Campden House, and more detailed descriptions of that indicate the lavish style that he chose, to emphasise his wealth and promote his status. We also have clues in the remaining buildings on the site and in the town.

The banqueting houses and the lodges were not destroyed in the fire, and have now been restored. The stonework detail gives an idea of the quality of the design and workmanship.

The nearby Almshouses, built at the same time, probably to show his beneficence to the town, are very solid and imposing. Campden House and the Almshouses had a water supply piped from the top of Westington Hill: it is not surprising that a place in the Almshouses was very desirable, compared to living conditions for other old people in the town. The Market Hall, built later around 1629, and gifts to St. James’ Church, all show off his wealth.

All this research has left us wanting to do more! A dig could give us additional details about the layout of the house, and maybe sometime we could create a computer-designed three dimensional model.

For more of the story, including the life of Sir Baptist Hicks and the impact of the Civil War on Campden, visit our website – www.chippingcampdenhistory.org.uk. Or drop in to Gloucestershire Archives who are hosting our exhibition about this work.