In 2011-2012 I was an archive trainee at Gloucestershire Archives before heading to Liverpool University to qualify as an archivist. I then completed my first professional contract as a project archivist at Hull History Centre before returning to Gloucester in January 2014 as a project archivist. My post, which is externally funded, will enable several key collections to be catalogued, beginning with material collected by Tony Drake.

Tony Drake’s flat was his office and he was surrounded by his passionate interest.

Discussions to move this significant collection into Gloucestershire Archives began in 2008 and finally came to fruition in 2011. I’ve been listing, appraising, sorting, cataloguing and packaging his records, using over 105 boxes and 1350 metres of archival tape. 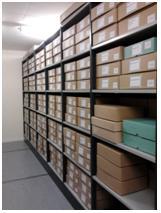 The collection now work has been completed.

The bulk of the material relates to his various roles within the Ramblers’ Association, (now known as Ramblers), over a period of 60 years. It includes maps, Footpath Orders, exhibition material, correspondence, photographs and slides. The records relate to the organisation and activities of the Association within the Gloucestershire Area as well as to designs of routes and waymarks and the creation of a British Standard for Stiles and Kissing Gates (BS 5709).

On his retirement from the Ramblers, Chief Executive, Tom Franklin, said of Tony Drake “From maps illustrating the region’s footpaths and easy-to-follow waymarks dotted around the country, to long-distance routes such as the Cambrian Way and the Cotswold Way, Tony’s work has helped people all over England and Wales to better access and use the countryside. His contributions will be felt by walkers in the countryside for generations to come.”

This collection is an amazing resource, providing an invaluable record of the challenges faced in ensuring public access to the countryside. It gives a valuable insight into the work carried out by the Ramblers members and includes numerous anecdotes. The records show a challenge that Tony issued to the Ordnance Survey in 1982 to pay the Ramblers’ Association £1 for every error he finds on the Gloucester Pathfinder map, and even include the receipt for £23 which they ended up paying. Among the mistakes he found was a lake 50 feet higher at one end! (D12676/6/1/3)

The catalogue (of some 221 pages) is now available in the searchroom (D12676) and will go online shortly. There is potential for more detailed descriptions to be compiled for some of the many maps, and we plan to make this the basis of a volunteer project. Meanwhile, I’ve now moved on to tackling Tony’s personal papers which include material related to the family store, Drake’s in Cheltenham, and his membership of Gloucestershire Morris Men.